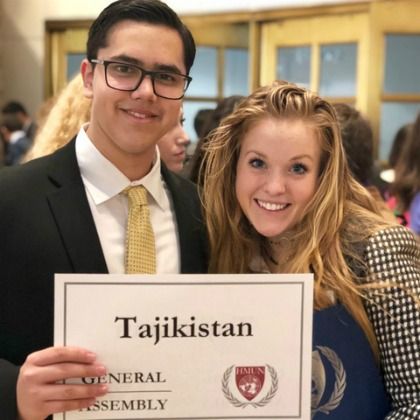 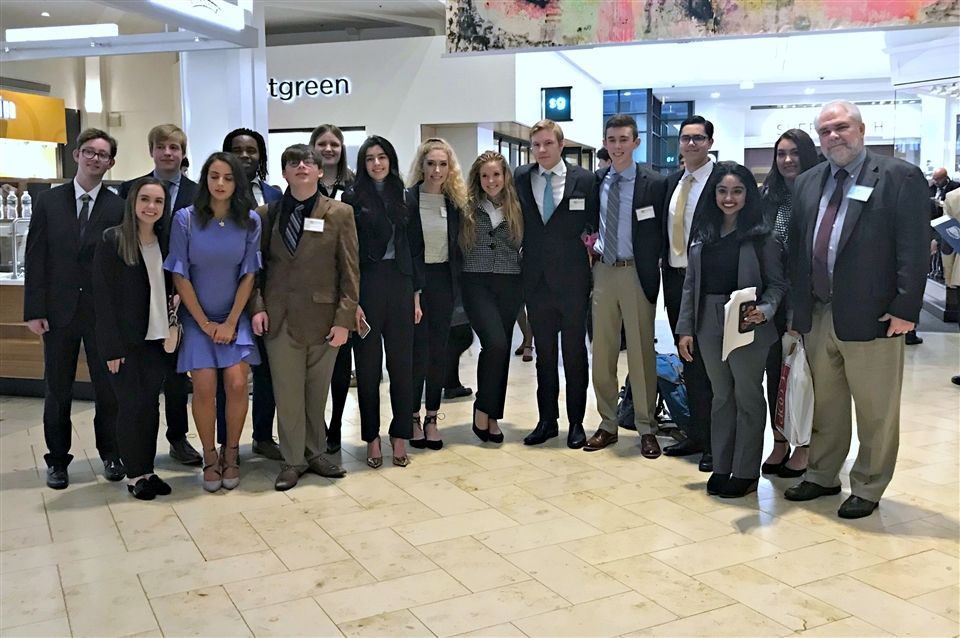 2/1/2019
By Saif Salim ’20
For months, Heritage Hall’s Model UN team spent countless hours writing and honing papers and reviewing parliamentary rules of procedure in preparation of its fourth consecutive trip to the Harvard Model United Nations Conference held January 24-27. Heritage Hall is the only school ever to represent Oklahoma in the 66-year history of the highly selective conference, which hosts more than 3,500 delegates from more than 50 countries.
This year, Heritage Hall was honored to represent Tajikistan. To be successful delegates, team members worked tirelessly to grasp firmly the country’s politics, culture, geostrategic position in the international environment, as well as pertinent issues (drug and human trafficking; nuclear proliferation; environmental degradation; low-intensity warfare) endemic to Central and Southwest Asia. Speaking to the hard work required, junior David Turner, who represented Tajikistan on the General Assembly’s Economic and Financial Committee, stated, “Drafting a position paper and formulating solutions to help the struggling Tajikistan economy required extensive research. In the end, my goal was to create a fair trade resolution with either Russia or the United States to aid the economy and possibly even improve Tajikistan's shaky relationship with Russia. Overall, it was a great experience that broadened my horizons by allowing me to view these complex issues in a new light.”
Junior Sukanya Bhattacharya, representing the Doctors Without Borders for all the conference delegations, described her experience in Boston this way: “The Harvard Model UN experience is truly life-changing. Meeting students from around the world and working with them to solve some of the world's most pressing issues is an unforgettable opportunity. Since returning from Boston, I have remained in contact with many of those I spent my days with. Our collective dedication to Model UN brought us closer together. In addition to representing an amazing organization, I loved that I met new people wherever I went – the Harvard MUN name tag was a bright signal that, though we did not know each other, we shared something in common and could easily be friends within a few minutes. I will always treasure this wonderful time I got to spend with my new friends."
Sukanya was named a Harvard MUN Social Impact Project Essay Finalist (only 20 are so honored at the conference) and earned the Diplomatic Commendation Award, a much-coveted prize by all MUN delegates throughout the world.
Other Heritage Hall MUN delegates enjoyed a rich learning experience, as well. Sophomore Sydney Mays said she found the opening ceremony of the conference to be very inspiring. The speeches on the power each individual possesses to create constructive change in the world motivated her to work hard for the good of all during group committee sessions. Several HH delegates formed “blocs within” on their respective committees, to help build consensus for passage of a resolution, while at least one delegate, sophomore Aidan McKirahan, participated in a “bloc without” to thwart passage of a resolution that would have harmed Tajikistan’s interests. Commending the team’s performance, Heritage Hall MUN Director Dr. Chris Hamel remarked, “Though young, Heritage Hall’s MUN delegation accorded themselves at Harvard with probity, diplomatic tact, and cultural empathy.”
Upon our return from Boston, Heritage Hall patron and chaperone Caryn Ross observed, “My husband and I were amazed by the multidimensional educational experience that HH MUN offers our students. The Harvard Model UN Conference was one of the most impressive student-led events I have ever attended. We watched our students research all aspects of their country, collaborate with others, network with peers from around the world, negotiate deals, write proposals, and present papers to the convention for three straight days, 9:00 am to 11:00 pm. Heritage Hall has much to be proud of in our MUN team!”
Now in my third year of HH MUN, I can attest to its benefits and the many ways in which the program has enriched my overall educational experience. HH MUN has been one of the most immersive educational activities I have ever engaged in, opening doors to the world of cultural coexistence as I make lifelong friends with other delegates from around the globe. I am thankful that Heritage Hall offers this unparalleled opportunity and I look forward to our team’s next adventure.
Back