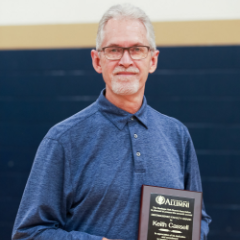 8/7/2020
The Heritage Hall Alumni Association (HHAA) has honored Upper School Head Keith Cassell as the recipient of its 2020 Distinguished Faculty Award.
Presented annually during the School’s Faculty Recognition Luncheon, the award recognizes a current faculty or staff member who has exhibited dedication and commitment to inspiring and educating lifelong learners.
HHAA Board president Cooper Cloud ’11 presented the award on behalf of the Association, pausing briefly to pay tribute to past recipients Dr. John Powell, Betsy Horn, Craig Brown ’78, Chris Gfeller, Cathie Perry, and Kelly Allen.
Keith Cassell began his Heritage Hall career in 1988 as head boys’ basketball coach, a position he held for 10 years. During his tenure, Cassell has taught history in the Middle and Upper Schools and served as the dean of students in the Upper School. Today, Cassell leads the Upper School as the Division Head. He and his wife, Amy, are parents of two Charger graduates – Parker ’11 and Brady ’12.
Recognizing that Cassell has accomplished much over the past three decades, Cloud opined that “inspiring multiple classes to produce T-shirts with his face on them” was among the most memorable.
Reflecting on his days as a student in the Heritage Hall Upper School, Cloud recalled, “I had the pleasure of playing sports with Parker and Brady, so I know Mr. Cassell on a personal level. As such, I can honestly say that my graduating class was fortunate to have him as both a patron and as our head of school. We didn’t get any special treatment, but we all knew him personally. However, as I have come to find out during this process, this type of connection was not limited to us, so I guess we weren’t as special as I originally thought,” Cloud laughed.
Quoting excerpts from nominators, Cloud shared the following:
Upon receiving the award, a humbled Cassell remarked, “To be in the company of the past winners is very rewarding, and I greatly appreciate the honor.”
Back