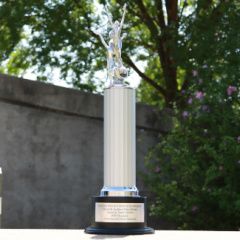 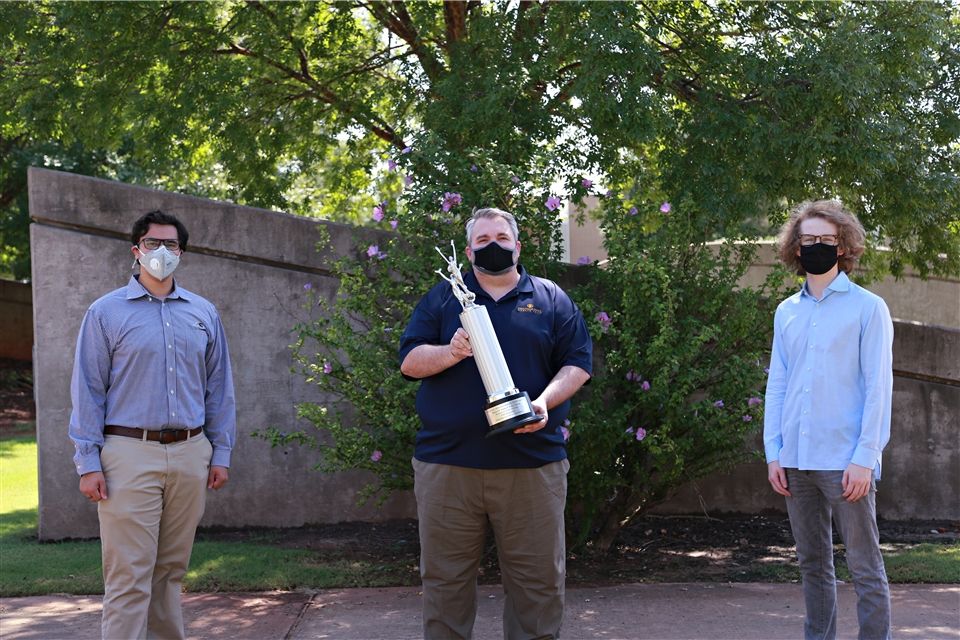 8/14/2020
Heritage Hall is celebrating the addition of its first Harland B. Mitchell National Speech and Debate Association (NSDA) policy debate national championship trophy to an already impressive collection of awards and recognitions. A perennial powerhouse, the School’s debate program has racked up numerous awards, including 18 6A OSSAA state championships (10 since 2004). This year’s historic national championship run by the team of senior Saif Salim and junior Sam Ring was made even more memorable because the National High School Debate Tournament was held virtually for the first time.
“The tournament was originally scheduled to be held in Albuquerque, New Mexico, but due to the coronavirus pandemic had to be moved online to host individual debate and speech rounds,” explained Heritage Hall Debate Coach Bryan Gaston. In what was the largest national competition (attendance-wise), Gaston said the competition included 193 policy debate teams from states around the country and one international team.
This year’s debate topic focused on whether the United States government should substantially reduce its foreign military sales and/or direct commercial sales of arms from the U.S. During each round, teams defended a different side of the question, either making a case for reducing sales or for the program’s benefits.
Over the course of five days, Salim and Ring debated 16 rounds, with one loss to Taipei American School (Taiwan), a team they later defeated in the semifinals. On their way to the championship, Salim and Ring also recorded wins over teams from California, Kansas, Iowa, Oregon, Nevada, New Jersey, South Dakota, and Texas.
“Going into the tournament, Sam and I anticipated doing well, but had no idea we would advance to the final round, let alone win. The School has done so much to support our program, so, though I have yet to fully process it, winning the championship for Heritage Hall was a cathartic way to end my four-year high school debate career,” Salim stated.
Ring also found the win to be a meaningful moment, “We’d had some tough calls at a few of the tournaments this season, so it felt nice to finish our partnership on a big win,” Ring said.
The NSDA, formerly known as the National Forensic League, was established in 1925 and held its first high school speech and debate national championship in 1931 at Ripon College in Wisconsin. A team from Miami High School in Oklahoma won the first policy debate national championship. Since then, the last state team to win the prize was in 1966 with the team of Richard Bernard and Brad Rice of Edmond Memorial High School.
Upon reflection, Salim observed, “Winning the championship reminds me that we are standing on the frontier of a long legacy that was forged before us, going all the way back to 1931. Even locally at the School, the win gives me so much more appreciation for the exceptional work alumni debaters did before us, and has inspired me to do everything I can to support Heritage Hall debate and high school debate more broadly in the future.”
Having crossed paths with and coached many successful debaters and teams, Gaston said of Salim and Ring, “Saif and Sam had a very special run at nationals and solid practices in the weeks leading up to the tournament. They are both very committed to competitive debate, eager to listen to coaching, and have the ability to adapt and execute a variety of argument strategies in rounds. I’m very proud of their performance.”
While two-person teams compete together at tournaments, Gaston said it is worth noting the contributions of the program’s entire team. “We had an exceptional team of varsity debaters across the board this year. That’s important because the overall strength of the team contributes to everyone’s success – practices are better, team research is better, and strategy sessions are all improved when you have a strong overall debate squad,” Gaston explained.
Also recognized at the tournament was Gaston, who received the Ted W. Belch Award presented to the coach of the national champion policy debate team. A permanent replica trophy displaying the names of each recipient on its base is housed in the NDSA national office. Gaston called it an honor to have his name listed among the nation’s top coaches.
Back