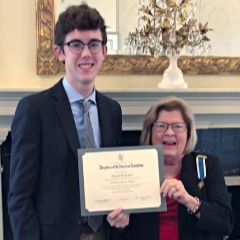 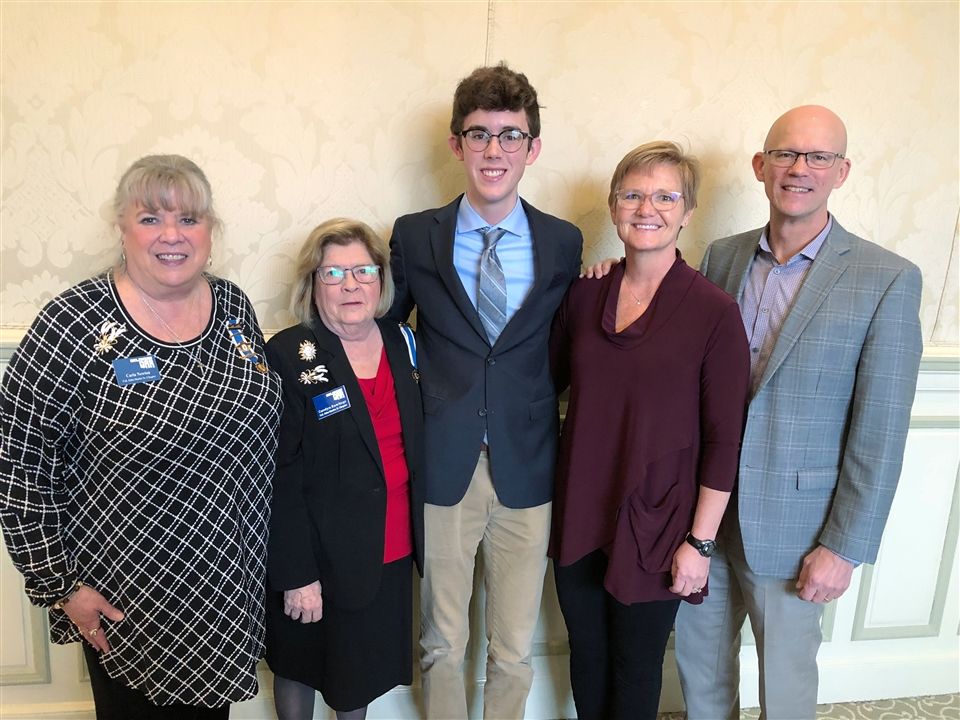 2/13/2020
Senior David Turner recently became Heritage Hall's sixth consecutive recipient of the Good Citizens Program and Scholarship Contest award presented by the Col. John Starke, Sr. Chapter of the Daughters of the American Revolution.
The award encourages and recognizes qualities of good citizenship, including dependability, service, leadership, and patriotism. In addition to demonstrating strong character, candidates must complete a timed essay on a topic provided at the actual time of writing; Turner submitted the following.

Topic: “You and your peers are our nation’s leaders of tomorrow. How would you energize America’s youth to fully engage as effective citizens? Why is that important?”
Our American Heritage and Our Responsibility for Preserving It
Every day, we undergo the constant bombardment of negativity and fallacious arguments spewed from the mouths of the biggest politicians in the United States. Democrat or Republican, it seems as if the loudest mouths in Washington D.C. are also the most negative, and this sets a dangerous example for the youth of America today.

Because the world is rapidly changing and the youth of America are growing more passionate about current issues, educating them and  focusing their passions are vitally important to ensure that the nation moves in a more positive direction. It is more important than ever to educate and inspire America’s youth to not be distracted from the real issues at hand by the constant bickering and distractions we hear so much. It is time we take action to not only educate, but also to unite our youth in a common patriotism.
To energize our youth about becoming good citizens, it is important that we work to cut out the distractions posed by modern day media. Although it is important for citizens, especially the youth, to stay informed on current events, it is imperative that we encourage young people to not follow the news as if it were some reality show on television.

One way this could be accomplished is through sponsoring small focus groups at middle and high schools all across the country to lead discourse on current events and find the commonalities shared by all Americans. This way, students’ views on the current state of America would be less influenced by the media and more influenced by hearing the real stories of people with whom they share the most intimate relationships. By considering how each law or policy affects individuals, rather than how these laws are received in the world of politics, we can clear the confusion and mixed feelings people have when their views are strictly politically oriented. The more young people we can influence to think in this way, the better our leaders will be in the future; they will be leaders among the people closest to them.

There is a great cultural problem in the United States today. While the split between political views seems to be about even, the clash between ideologies is at an all time high. This clash is not a problem on its own, but the way our culture handles disagreement is entirely unproductive– it involves people talking “at” each other instead of “with” each other. In schools, it is crucial that we sponsor teaching styles that endorse listening over talking and reason over emotion. This can be accomplished through encouraging teachers to lead inquiry based discussions and ask real questions that affect students’ personal lives and the national landscape. Students need to be thinking about issues in a holistic manner, not based on the views of a party. In doing this, we can instill real passion in America’s youth that will lead them naturally to want to go vote, advocate, and exercise their rights.
At this turning point in America, it is urgent we educate and inspire our youth through sharing meaningful conversations about the state of the nation and their relationships with others. By cutting out media distractions and focusing their passions, we can create truly effective leaders for the bright future of the United States.
Back