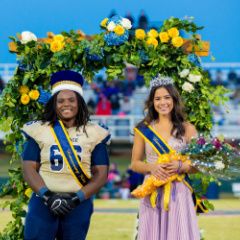 10/26/2020
By Wesley Jansen '21
Homecoming week is a time of year that brings out school spirit in Chargers of all ages. During the week of October 19-23, Heritage Hall students participated in various class competitions and themed dress-up days, crowned a Homecoming king and queen, and cheered on the football team in a district showdown.
In the Upper School, student creativity was pushed to the limits with dress-up day themes ranging from “Cowboys vs. Aliens” to “Dynamic Duos.” Each day took on added importance as students competed for class competition points and the title of Best Costume. Though not in a competitive way, Middle School students also enjoyed dress-up days with themes such as “Mismatch Monday” and “Wayback Wednesday, while lower schoolers brought back past favorites including “PJ Day” and “Polka Dots and Stripes.”
Topping off the week-long festivities were the coronation and football game. This year’s senior Homecoming king candidates were Wesley Jansen, Robert Mbroh, Omari Smith, Ford Stephenson, and Melvin Swindle. Queen candidates were Tia Brown, Hadley Burns, Helen Park, Addie Ritenour, and Annabelle Treadwell. Nominated by their Upper School teachers and fellow students, these candidates exemplify the Charger Code and demonstrate excellence in academics, the arts, athletics, and service.
While all were worthy of being named Homecoming queen and king, Park and Smith took home the crowns. Following the announcement, Park remarked, “I had so much fun with everyone on the court, and made some incredible friendships in those five days. It was also great to see Omari be crowned king because we’ve been good friends since middle school – he was even my HOCO date sophomore year!”
After the coronation, Heritage Hall posted a 37-29 victory over the Anadarko Warriors. In addition, the seniors were announced as the winners of the class competitions – a perfect ending to a great week!
Back