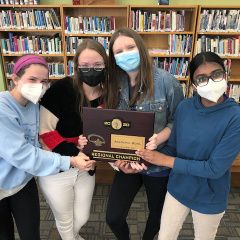 11/23/2020
By Wesley Jansen '21
Academic Bowl is a quiz-based competitive activity that tests students’ knowledge in a broad range of subjects. Over the past several years, Heritage Hall has been recognized as a top-performer. This year’s Academic Bowl team is further enhancing the program’s esteemed reputation.
Earlier this month, the Chargers followed up their 2-0 district title run with a 3-0 showing at the regional tournament to secure the championship. The road to victory saw big wins over Kingfisher, Jones, and Tuttle, as well as a team high score of 330 points.
Featuring an all girl roster – consisting of seniors Katie Curran, Sarah Curran, and Elizabeth Siatkowski, and freshman Neha Kodali (the team’s high scorer) – the team has garnered the nickname, “Girl Power” Squad.
Commenting on the team’s success, Coach Robert Ring said, “We have a balanced team this year made up of veteran players and young talent, with everyone contributing to the wins. Our team philosophy is to always be positive and to enjoy the game. It's been great so far, but we have more work ahead of us and some good opponents to face."
Next up for the Academic Team is the area tournament on Jan. 16 at Bridge Creek High School. Onward, Chargers!
Back